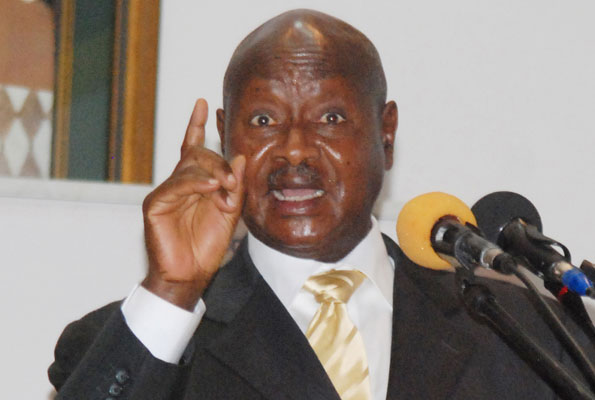 President Yoweri Museveni has sternly warned the Egyptian “government and other groups” against making “chauvinist and irrational statements” in the wake of Ethiopia’s decision to construct a multi-billion dollar electricity dam, Chimp Corps report.

“I have seen in the print media statements coming out of Egypt regarding the commendable work of the Government of Ethiopia of building dams for electricity in that country,” said Museveni.

“This is what the whole of Africa needs to do. That is one reason the economy of Ethiopia has been growing in double digits. It is, therefore, advisable that the new Government of Egypt and some chauvinistic groups inside Egypt should not repeat the mistakes of the past Egyptian Governments,” he added.

Museveni said leaders of Egypt should not be victims of the “misguided policies of past leaders.”

He further stressed that threat of the Nile is not the construction of dams but the “lack of electricity and underdevelopment in the tropics.”

“The biggest threat to the Nile is continued under-development in the tropics i.e. lack of electricity and lack of industrialization. On account of these two, peasants cut the bio-mass for fuel (firewood – enku) and invade the forests to expand primitive agriculture.

Here in Uganda, the peasants destroy 40 billion cubic metres of wood per annum for firewood. They also invade the wetlands (ebisaalu, ebitoogo, entobazi, ebifuunjo, ebisharara) to grow rice,” he noted.

“This interferes with the transpiration that is crucial for rain formation. Our experts have told me that 40 percent of our rain comes from local moisture – meaning from our lakes and wetlands,” said Museveni, adding, “That is why, for instance, West Nile and West Acholi have got more rain than Karamoja being on the same latitude notwithstanding. It is, apparently, on account of the huge wetlands in South Sudan, the forest in Congo and the wetlands in Uganda.”

Ironically, said Museveni, the Egyptians wanted to drain the wetlands in South Sudan through the Jonglei canal.

“It was one of the causes for the people of South Sudan to wage war against Khartoum, which was collaborating with the Egyptian Government’s misguided and dangerous policies of that time,” he added.

Therefore, said Museveni, the threat to the Nile is lack of electricity in the tropics and lack of industrialization thereof.

Museveni also pointed to unknown diplomatic efforts aimed at persuading Egypt not to pursue the path of war.

“I have given these views to the past Egyptian Governments and to the present one. Therefore, it is advisable that those chauvinistic statements coming out of Egypt are restrained and through the Nile Valley Organization rational (not emotional and informed statements) discussions take place.”

“No African wants to hurt Egypt; however, Egypt cannot continue to hurt black Africa and the countries of the tropics of Africa,” he concluded his speech.

Ethiopia boasts one of the most advanced and deadliest armies on the continent.

The battle-hardened army derives its unwavering determination to protect its strategic interests right from the late 1880s when it resisted the wave of colonialism that swept Africa.

Responding to Morsi’s threats recently, Ethiopia’s premier, Hailemariam Desalegn, the construction of the Grand Renaissance Dam would was “unstoppable.”

“All options include a war. I don’t think they will take that option unless they go mad,” warned Hailemariam, adding, “I urge them to abandon such an unhelpful approach and return to dialogue and discussion.”
-ERTA