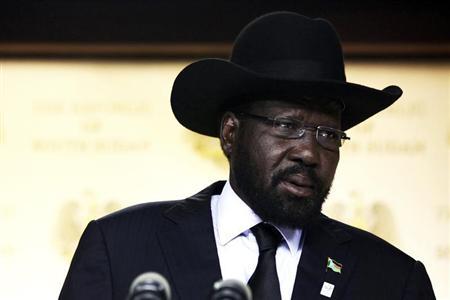 State television cited a presidential decree saying the ministries would be run for now by their under-secretaries.

Kiir has been facing dissent from within the SPLM and also from the street over an economic crisis, largely the result of disputes with Sudan that have prevented it exporting its lifeblood crude oil, and endemic corruption.

Western diplomats say they fear South Sudan could slide into instability as it grapples with multiple challenges – notably the confrontation over oil flows with its former civil war foe to the north, as well as escalating rebel and tribal violence.

Machar had recently hinted in an interview that he might challenge Kiir for the SPLM leadership before the 2015 national elections, and Kiir had already stripped Machar of some his duties in April in what seemed to be a move to curb his profile.

Both men were on opposing sides of a split within the SPLM during much of the 1983-2005 civil war with Khartoum.

Since the SPLM has no political rivals of any standing, the battle for leadership of the SPLM is effectively the race to be president.

Amum, for his part, had recently criticized Kiir for suspending two ministers in a fraud probe, according to local media. The decree said a party committee would investigate him.

No more details were immediately available. It was also not clear when Kiir would appoint a new cabinet.

Barnaba Marial Benjamin, until now information minister, said he had only learned about his sacking from the evening television news. Amum also said he had been caught by surprise when Reuters reached him on his mobile phone.

Nhial Bol, editor of the independent Citizen TV, said Kiir had probably acted to end the paralysis in his government.

“Things have not been moving in the government because of this internal fighting over who is going to control the SPLM,” he said.

The news comes as landlocked South Sudan shuts down its oil production, its lifeline, after Sudan said it would close the two cross-border export pipelines unless the South stopped supporting rebels on Sudanese soil. Juba denies the claims.

Its army also faces escalating tribal violence as well as fighting with a rebel group in Jonglei state, which has made it impossible to pursue oil exploration plans.