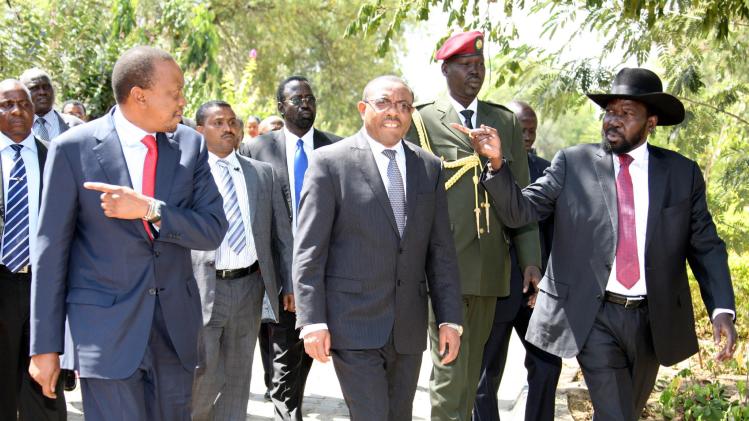 VOA –  South Sudan’s government on Friday has agreed to a ceasefire in a bid to end fighting that swept across Africa’s newest nation that has left at least 1,000 people dead and led more than 60,000 civilians to seek refuge at U.N. bases.

The development came as regional leaders meeting in  the Kenyan capital, Nairobi, Friday as part of the regional grouping IGAD urged both sides in the conflict to seize “the small window of opportunity” and begin peace talks.

At the same time the leaders said they would not accept the “unconstitutional overthrow” of South Sudan’s government.

Spokesman Arik confirmed the development and said government forces are prepared to defend themselves if attacked.

A communiqué issued at the conclusion of the summit called for “urgent measures in pursuit of an inclusive dialogue” and said face-to-face talks between the stakeholders in South Sudan’s crisis should occur by Tuesday, December 31.

It also welcomed a commitment by South Sudan’s government to end hostilities and called for former South Sudan vice president Machar and other parties to do the same.

Violence erupted in the country on December 15 and has spread across the country as a power struggle between President Salva Kiir and Machar, his main political rival, has intensified.

The fighting has divided the military against itself in some areas, and has raised inter-ethnic tensions.

Both Machar and Kiir have agreed in principle to holding talks, though the government has rejected Machar’s conditions, including the release of his political allies who were jailed in the early days of the crisis.

In a speech at the summit, Kenyan President Uhuru Kenyatta said efforts should be made to include the detained political leaders.

“The detainees are part of South Sudan’s leadership and as such are part of the solution. South Sudan’s legal system must process them as it should while they are treated humanely and quickly enabled to be an integral part of the dialogue that will solve the underlying political problems that have brought us to this unfortunate crisis,” Kenyatta said.

Kiir has accused Machar and his supporters of attempting a coup.  Machar denies the allegations, but has called for the military to overthrow the president.

Ethiopian Prime Minister Hailemariam Desalegn, the current chair of IGAD, told the summit that authority in the country lies with the president.

“It should be underscored that the legitimate government of South Sudan under President Salva Kiir Mayardit is the duly elected representative of the people of South Sudan and it has every responsibility to restore peace and stability throughout the country,” he said.

Kenyatta and Hailemariam met with Kiir in Juba Thursday to discuss the prospect of talks. Kiir was not present at Friday’s summit.

One comment on “South Sudan Agrees to Ceasefire to End Violence”