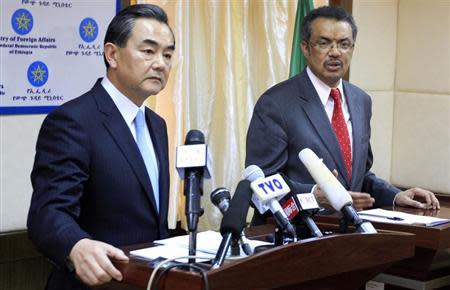 ADDIS ABABA/KHARTOUM (Reuters) – China, the biggest investor in South Sudan’s oil industry, called on Monday for an immediate ceasefire in the world’s newest state, as rebel and government negotiators haggled over the scope of peace talks meant to end three weeks of fighting.

Chinese Foreign Minister Wang Yi said Beijing was deeply concerned by the unrest in South Sudan that has killed more than a thousand people and forced the government to cut oil production by about a fifth.

Sudan, which also has an economic interest in its southern neighbour’s oil output, said the Juba government discussed the deployment of a joint force to secure its oilfields during a visit by Sudanese President Omar al-Bashir.

“China’s position with regard to the current situation in South Sudan is very clear,” Wang told reporters in Addis Ababa, where the peace talks are taking place. “First, we call for an immediate cessation of hostilities and violence.”

An Ethiopian delegate said Wang had met both rebel and government delegations.

Three weeks of fighting, which began in the capital but spread beyond, often along ethnic faultlines, have pitted President Salva Kiir’s SPLA government forces against rebels loyal to former vice president Riek Machar.

The peace talks opened formally on Saturday in Ethiopia, but delegates have yet to sit down for face-to-face negotiations.

The fighting is the worst in South Sudan since it won independence from Sudan in 2011 in a peace deal that ended one of Africa’s longest civil wars.

Sudanese Foreign Minister Ali Karti said Kiir and Bashir had discussed the deployment of a joint force to secure oilfields under threat from the rebels. He said the areas of deployment would be discussed at a later date.

The prospect of security cooperation between the two countries would represent a remarkable improvement in ties, after the civil war foes came close to conflict again in disputes over oil fees and the border in the early part of 2012.

South Sudan’s oil production fell by 45,000 barrels per day to 200,000 bpd after oilfields in its northern Unity state were shut down due to fighting. Upper Nile state is still pumping about 200,000 bpd, the government says.

Historian Douglas Johnson said the risk to revenues if the fighting spread to more oilfields would be a worry for Khartoum. He also said oil companies would be reluctant to return to contested oilfields.

“A deal between Juba and Khartoum whereby Sudan helps to provide security in the oilfields would probably bring at least some of the oil companies back,” said Johnson.

The lack of progress at peace talks has unnerved foreign powers, who worry that South Sudan could spiral into full-blown civil war.

“The delaying tactics that we are seeing at the moment in Addis Ababa give us cause to fear that the conflicting sides have no real interest in a swift political solution,” said a German Foreign Ministry spokesman.

The United Nations said there had been signs over the weekend of pro- and anti-government troops mobilizing around the country and reports of military clashes.

The world body is working to almost double the number of peacekeepers it has in South Sudan to 12,500 in a bid to better protect thousands of civilians sheltering at its bases.

The U.N. mission in South Sudan, known as UNMISS, said three Bangladeshi military utility helicopters deployed to Juba on Monday, on loan from the U.N. peacekeeping operation in neighboring Democratic Republic of Congo.

A rebel delegate at the peace talks on Monday reiterated a complaint that Ugandan forces and gunships were attacking rebel positions.

Ugandan army spokesman Paddy Ankunda said it was deploying more troops in South Sudan because security had worsened, but added they were there to help stranded Ugandans. Ugandan forces also patrol Juba’s airport at Kiir’s invitation.

“If the Ugandans are doing what … the opposition are claiming – which is active military intervention in support of any of the sides to the conflict other than protect critical infrastructure and installations within South Sudan – then that, I believe, would be absolutely unwarranted,” said Getachew Reda, spokesman for Ethiopia’s prime minister.

Ugandan President Yoweri Museveni said on December 30 that east African countries would have to “defeat” Machar if he rejected a ceasefire.